If you don’t want to use a teleprompter, but want to have a totally professional video, you still have to be on video, at least some of the time.

It’s best to limit your on-screen appearances to avoid rambling, though, and this video is about how to deal with that fact.

This is actually quite a problem for a LOT of people. As soon as you have to put something other than yourself on camera, that big, ugly slimy ogre of overwhelm emerges from the black lagoon of anxiety.

Because for all the complaining we do about being in front of the lens, that’s infinitely easier than knowing what to do INSTEAD of being on camera.

That’s why I’ve built this 3-part series. It started with looking at the value that you and only you can bring, continued with how to portray it on screen, and now, how to extend that value though things that, well, AREN’T you.

I hope you find this a non-intimidating look at what could turn out to be quite rewarding and lots of fun.

So watch, do, and be awesome!

Oh, and to get the most out of this video, it really would be wise to watch the one that came just before this.
Watch that here. 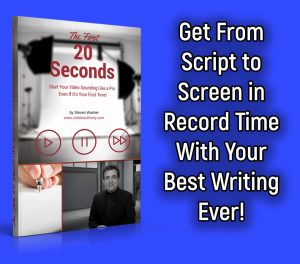