In video we often forget about how important audio actually is. When we’re made aware of it, it’s a relief to get it right.

But for a couple of years now, thousands have been suffering in silence, even with superb audio, because they chose to do their videos live. And not because the audio itself is bad, but because it’s out of sync with the video.

Little is more annoying to a viewer than being out of sync with the person they’re watching. It happened to me last week. I recorded a video that had been live-streamed to BE recorded.

What I didn’t realize was that the video would have been live-streamed with the same deficiency! And also that no one had a proper solution to it. Well, maybe for OBS if you had a Doctorate in Quantum Physics, but for ordinary mortals, forget abut it!

And there is nothing to make it right in Zoom.

So I decided to solve the problem myself. Here’s the result. It has the great advantage of being possibly the simplest fix you’ll ever see for anything in video.

You can ask questions live and watch the deconstruction and redesign of three videos made for YouTube, Instagram and LinkedIn. We’ll be doing a deep dive into their marketing, production, performance and script.

And here’s a handy search for the BlueAVS Capture Card mentioned in the video. 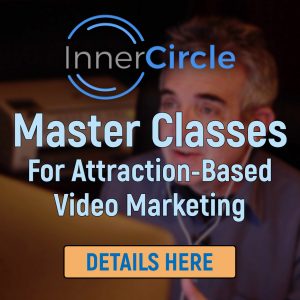